Above is a photograph of the pupils of Tharston School in the late 1920s (see below). If you know who any of them are please make Contact.

We received the following email from Richard, son of one of the people in the photograph:

"You have a photograph of the village school on your website. My mother Constance Goodswen is there - second row down, sixth from the left, wearing a dress with a large white collar and next to a very tall girl. Her sister Sybil is also there second row up fifth from the left. You have the date wrong. Connie was born in January 1914 and had left school by the time that she was 14; Sybil was born in 1918. It must be mid to late 1920s. They lived with their grandparents James and Sophia Goodswen who are buried in the churchyard at Tharston. Connie did not get a good education - she was clever but she told me that most of the time in her teens she was looking after the young ones. The girls walked together through the fields from their house to the school each day."

Thank you Richard for getting in touch with us, your contact puts names to faces and gives us another insight into the life of Tharston.

The photo below from a postcard is thought to be from about the same time - some similar faces in both pictures.

More recent pupils can be seen in the winter-time photo below, dated approximately 1951.

If you are one of those pictured or know any of those named, we would like to hear any stories of school life. If you would like a copy of the photograph please make Contact.

Just after the turn of the 1900s, Tharston School pupils were rewarded for good attendance and promptness with small cards depicting well known places, local and national, giving their name and the week of their success. 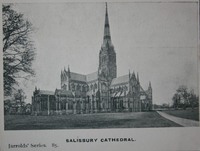 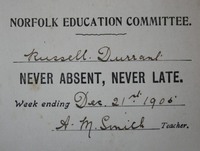 The above is an example of an award to Russell Durrant for the week ending 21st December 1905.
The picture of Salisbury Cathedral is numbered 85 in "Jarrold's Series". Additional two examples of the Pier and Promenade, Lowestoft and Postwich Reach, Near Norwich, are numbered 33 and 84, suggesting that there were quite a large number of different scenes.
In the Norfolk Archive Centre is an album with many awards to Russell Durrant - perhaps he was a model student! The 1901 Census gives Russell as living with his family who were farmers, aged 2. He was therefore born about 1899 and must have been 5 - 7 years old when given the above awards.

All schools have to keep a log book, Tharston School being no exception. The school now being closed means the log book is now held at the Archive Centre. The Great War years were a special time and the relevant years have been transcribed to see how the shool coped with the war and what it did to help the effort. The 1914-1918 and 1939-1945 entries have been transcribed and can be viewed and downloaded from the Publications page. The entries are at best very sketchy but in general are very boring with little or no great detail. What a pity - I wonder what OfSTED would say about such record keeping!