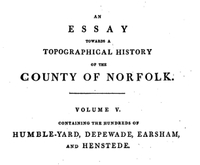 AN ESSAY TOWARDS A TOPOGRAPHICAL HISTORY
OF THE COUNTY OF NORFOLK
CONTAINING A DESCRIPTION OF THE TOWNS,
VILLAGES AND HAMLETS, .....

THIS village is called by various names in old evidence, as STERSTUNA, or Steres-Town, Therstun, Testun, Thurston, and Tharston; and was in divers parts at the Conquest, several of them belonging to the Manor of Forncet, of which the capital manor was always held at one fee. ULERIC held it of Bishop Stigand at the Confessor's survey, and ROBERT DE VALLIBUS, Vals, or Vaux, of ROGER BIGOT at the Conqueror's. The church had 40 acres of glebe valued at 3s. per annum, the manor was worth 5l. 6s. and the town was a league and a half long, and half a league broad, and paid 15d. ob. to the geld. This was called Nerford's or Tharston-Hall manor.

Another part belonged to ROBERT FITZ CORBUN, which was worth 10s. per annum in rents at the first, and 20s. at the last survey; which constituted the

MANOR OF THARSTON'S, OR ST. OMER'S,

Taking both its names from the lords of it; in 1236, Richard de Tharston was lord, and held it at a quarter of a fee of Robert de Shelton, of whom he purchased it; and Shelton held it of Robert de Tateshale, lord of Bukenham-Castle, from which it had been formerly sold by the Albanys.

In 1317, Richard de Therston and Cecily his wife, settled it on themselves for life, and then on Ralf de St. Omer; and it soon after divided into two parts, for in 1329, Richard and Cecily held one part of Bukenham-Castle at a quarter of a fee, and William Jermy and Ellen his wife, held the other of the said castle, at the other quarter of a fee; but before 1401, St. Omer's part was joined in Will. Rees, Esq. who was lord of this, and

As it is now called, which continued in the Vauxes a long time; in 1275, John de Vaux had a charter for free warren here, and in 1285, he had a lete held once a year, but the King's bailiff of the hundred was to be present, or the lord could not hold it, unless he agreed with him yearly; which was afterwards done constantly, till it was bought in perpetuity; and then the lord had view of frankpledge, assise of bread and ale and weyf.

In 1288, upon the partition made between the two daughters and coheirs of John de Vaux, MAUD married to WILLIAM DE ROOS, and PETRONEL to WILL. DE NERFORD, who had this manor, and that of Shotesham in Norfolk, Wisete in Suffolk, and the moieties of Holt and Cley; the whole advowson of Holt, with divers knights fees in Thorp, Winch, Bichamwell, Thurneton, Moringthorp, &c. and it continued in the Nerfords; for after the death of William and Petronel, John de Nerford and Agnes his wife, in 1328, settled this, Shotesham Nerford's, the advowson of Pentney Priory, the church of Holt, &c. in Norfolk, the advowson of Rumburgh priory, Wisete manor, &c. in Suffolk, on themselves and their heirs, in tail. This AGNES was daughter of William de Bereford, sister and their heir of Edm. De Bereford, widow to John Argenteyn, and married after Nereford's death, to John Mautravers, senior; she died seized in 1375, of this and Shotisham, and they went to John de Brewse son of Peter de Brewse, Knt. and Margery his wife, who was a Nerford; and Kat. De Brewse, his sister, a nun at Dertford, released her right in it. In 1383, Sir John settled it on William de Cobham and William de Bergh, his trustees.

Sir THOMAS ROOS of Hamlake, Knt. and Beatrix his wife, who descended from Maud, the other daughter and coheir of Vaux, had it; and in 1394, Margery de Nerford released and conveyed all right in it, to

WILLIAM ROOS or REES, Esq. and his heirs, who held it in 1403, of Thomas Mowbray's manor of Forncet, at one fee. In 1410, this William Rees, Esq. by will gave his two manors in Therston, the one called Nerford's, and the other St. Omer's, to be sold by his executors, with his manors of Caxton and Wrotyng in Cambridgeshire, to found a chantry in the college of St. Mary in the Fields in NORWICH, and to pay Sir Thomas the anchorite near that college, 2s. a week for life; and soon after it was sold to William Leveney and after purchased by

Sir ROBERT CLERE, Knt. Who held it in 1432, and it passed in that family as Keswick, at p. 44. In 1549, Sir John Clere was lord, and the manors were valued at 30l. but he manumised much, and died Aug. 21, 1557, leaving Sir Edward his son and heir, then 25 years old, who was to permit Sir Richard Fulmerstone, and his other executors, to take the profits for 5 years, to pay a legacy to Walter Haddon his son. He made a long lease of the demeans, to John Woolmer, and settled the manor as at p. 166. He left it to Sir Edward Clere of Ormesby his son and heir, who sold it to John Smith, Esq. of Ameringhall, and he in 1617, to Sir Thomas Knyvey of Ashwelthorp, Knt. when there were 319 acres 3 roods and a half of copy-hold, which paid 10l. 2s. 3d. quitrents, besides 6 capons, 2 hens, 3 geese, 10 eggs, 2 bushels of oats, 7 days work and a half in harvest, 7 days work in winter, half a day's work in hay-seele, and half a day's work in weeding; which were even now paid in kind. The freehold rents of ancient tenure, were 6l. 2s. 4d. per annum, 12 capons, 5 hens, 1 comb of wheat, half a pound of pepper, and one July-flower. The freehold rents of the new purchases or manumissions, were 2l. 7s. 5d. on capon and one red rose. The rents of 159 acres of demeans granted off free, 6l. 17s. ob. and one capon. The profits of the court one year with another, 8l. 10s. The lord hath had a warren of coneys at Holmehill, and hath letten HOLME chapel to farm. It then paid 3d. per annum to Forncet, and 1s. to Stratton manors. In 1626, Thomas Knevet of Aswellthorp, Esq. sold it to

Laid in Stratton St. Michael, and this town, for which see p. 202. Before the Welholmes removed to their new made manor-house at Stratton, they dwelt in the old site of their manor by Holm-hill in this parish, to which belonged an ancient free-chapel dedicated to St. Giles, called Holme or Welholme's chapel; the site of which now belongs to the manor of Tharston: and on account of this it is, that we often meet with the churches of Tharston mentioned, but the manor united to STRATTON-HALL.

The advowson of the rectory of the church of St. Mary the Virgin at Tharston was given in King Stephen's time, to the priory of PENTNEY in Norfolk, by Rob. de Vaux, founder of that house, to which it was appropriated before 1273; it was first valued at 15, after at 18 marks, and had a house and 40 acres of glebe. The vicarage is valued in the King's Books, by the name of Thurston, at 5l. 1s. 8d. and being sworn of the clear yearly value of 45l. it is discharged of first-fruits and tenths, and is capable of augmentation. It paid 7s. 8d. procurations, 16d. synodals, 16d. Peter-pence , and 7d. carvage; and in 1571, the Queen's receiver general paid to the vicar out of the impropriate tithes, a yearly pension of 3l. 6s. 8d. There was a GILD held in honour of the Blessed Virgin, and the following religious persons had temporalities valued as follow; the Priory of Thetford monks at 2s.; the Abbot of Creke 6d.; the Prior of Bukenham 2s.; the Prior of Norwich 4s. 6d.; and it paid clear to every tenth 4l. 12s.

The CHURCH hath a square steeple and four bells, the nave is leaded, the chancel and north porch are tiled.
There are two monuments of black marble thus inscribed,

Here resteth the body of ROBERT WOOD Esq; Sonn and Heire to Sir Robert Wood of Aylesham in the County of Norfolk Knt. who departed this Life in this Parish the 23 Day of May 1623. Here also resteth the Body of ANN WOOD, Wife to the said Robert, Daughter and one of the Co-heirs of Robert Woolmer Esq; sometimes Clark of the Assizes for this Circuit; the said Anne departed this Life at her House at Brakene-Ash in this County, the 7th Day of Jan. 1646. The said Robert and Anne had Issue 3 Sons and 2 Daughters, Sir Robert their eldest Son, married Elizabeth the 3d Daughter of Sir Thomas Richardson Knt. late Chief Justice of the King's Bench. Edmond their 2d Son, married the Daughter of William Adams of Patterchurch in the County of Pembrookshire Esq; Philip 3d Sonn un-married. Frances their eldest Daughter married Thomas Fletcher of St. Edmonds-Bury in the County of Suffolk Esq; Alice the youngest Daughter married Anthony Penning of Little-Baddo in the County of Essex Esq.

Here lieth the Body of JOHN Woolmer Esq; sometimes Clark of the Assizes for this Circuit; a Man of excellent Learning, ingenuous Conversation, and of singular Piety and Integrity of Life; and the Body of ALICE his Wife, a modest, discreet, industrious and religious Gentlewoman, both which have left behind them a perpetual good Name, answerable to such everliving Vertues. The said John Woolmer died in this Towne, the 2 Dec. 1598, and Alice his Wife died at Croxton in this County the 9th Dec. 1610, after they had enjoyed each other the space of 32 Years; they left Issue 3 Daughters, ANNE the eldest, married to Robert Wood of this Town Esq; who had Issue 3 Sonns, Robert, Edmund, and Phillip; and two Daughters, Frances and Alice; ALICE the 2d Daughter married to Henry Bastard of Great-Dunham in this County Gent. who had Issue 6 Sonns, Richard, Henry, Robert, Thomas, Leonard, and John; and 5 Daughters, Elizabeth, Anne, Margaret, Alice, and Frances; FRANCES the youngest, married to Mathew Goad of Croxton aforesaid Gent. and had Issue 4 Sonns, Woolmer, Mathew, Thomas, and Francis; and one Daughter Catherine.

Hoc pietatis Monumentum posuit. [this is a monument placed here to his sense of duty]

advowson: the right of presentation of a candidate to a benefice or church office

bushel: an imperial unit of dry volume, equivalent to 8 gallons

capon: a castrated rooster or cockerel

carvage: a tax probably to do with ploughing rights

chantry: a monetary trust fund established to employ one or more Priests to sing a stipulated number of Masses during a stipulated period of time for the spiritual benefit of a deceased person, generally the donor

frankpledge: a pledge of peace

glebe: a plot of land belonging or yielding profit to an English parish church or an ecclesiastical office
Junij: month of June

league: on land, the league was most commonly defined as three miles - word originally meant the distance a person could walk in an hour

manumise: to free servants and slaves

Peter-pence: a tax of one penny per household paid in medieval England to the Papalcy

procurations: payments for management or stewardship

synodals: a tribute in money paid to the bishop or archdeacon

warren: a rabbitry or fixed establishment of cuniculture or possibly a type of hunting franchise under the Anglo-Norman Forest law