Parish of Tharston - Roll of Honour

Local information led us to believe that the original Roll was compiled by asking Tharston residents who needed to be included and so was not the full list of all those eligible. Research by William Hawkins has shown that there were 9 people who lost their lives in the Great War who should be included on the rolls but are missing for some reason or other, bringing the total number to 14. The additional 9 are:

Any information about these people and any of the others on the Roll of Honour would be interesting.

More information on the Roll of Honour or the War Memorial is here.

We have a page for each person who lost their life and is named on the Roll of Honour. From our contact with Jane about her Lloyd ancestors, a set of photographs and information has been kindly donated to the THS documenting her visit to the WW1 battlefields and the War Graves. Other members of soldiers' families have given photos of items from the that belonged to the soldiers. The individual soldier's records, some with the photographs, can be found here. 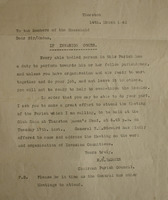 There is a road in Tharston called The Plump. It is believed that a plump is a group of local men who joined together to form a local band of soldiers, ready to be called into action when needed. The Plump is where they used to train and many musket balls have been found in that area.

With travel and mobility more restricted years ago than we have today come to accept, around the time of The Great War many connections between local villages can be found. One such connection is between a soldier found in a book "The Ashwellthorpe War Memorial - The Men It Commemorates" by Jennifer Robbie, an Edgar James Goose, who had ties with Tharston as his parents and grandparents lived in Tharston and were buried in the churchyard of St Mary's Church; but many of the other men in the book also have good local connections. 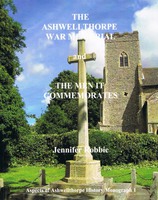 "It is now nearly 100 years since the Great War ended - three generations ago.

The men commemorated are Harry George Bateman, Percy William Bateman, Leonard Maurice Copeman, William John George, Edgar James Goose, Albert George Grimmer, Arthur John Hunt, Ernest Edward Squires, Walter Robert Squires and Frederick Levi Tubby from World War 1. Also commemorated are Eric Frank Browne and Ernest Thomas Goodrum from World War 2. They were the sons, husbands, fathers, brothers, cousins, grandchildren or friends of everyone who then lived in the village. Now, with the passage of so much time, there are few here who have such a direct relationship to the names inscribed on the Memorial. I hope this booklet will go some way towards remembering the men of Ashwellthorpe who were not able to return to the village."

A quote from Jennifer's book showing a link to Tharston ...

Edgar James Goose was born in Forncett St Peter on 12 March 1883 to James and Mary Ann Goose nee Riches; James was born in Tharston in 1852 to William and Eliza Goose; William's parents William and Sophia Goose nee Slater had lived in Tharston from c. 1836. Edgar's father James was an agricultural labourer and then a Team Man and lived at Badajos, Tharston, until 1882 before moving on to Forncett St Peter, Wreningham and Ashwellthorpe.

Edgar James moved with his parents and siblings to Wreningham then Ashwellthorpe and was admitted to Ashwellthorpe School on 3 October 1893 at Standard III, he achieved Standard IV in 1896 and left the school on 1 September that year to go to work. After his marriage in 1907 to Grace Emma Gibbs, Edgar and Grace moved to Wacton where they had five children. Edgar's parents James and Mary Ann remained in Ashwellthorpe for some years before moving to Tharston and they are both buried in Tharston churchyard.

It is believed Edgar James Goose enlisted in December 1915/January 1916 and was a Private in the 2nd Battalion the Norfolk Regiment when he was killed on 22 April 1916 during the Siege at Kut-Al-Amara. His memorial is at the Basra Memorial within the Basra War Cemetery in Iraq, although the Memorial itself was moved by presidential decree in 1997 to a location in the middle of what became a major war zone.

Edgar James Goose is not only remembered on the Ashwellthorpe War Memorial but also on the Wacton War Memorial in the churchyard of All Saints' Church and the Roll of Honour inside that church.

Book published July 2018 - Costs £9.00 from Jennifer Robbie (01508 489432) or Ketts Books in Wymondham. Any profits arising from its sales above the printing costs will be donated to the Ashwellthorpe Church Tower repairs.